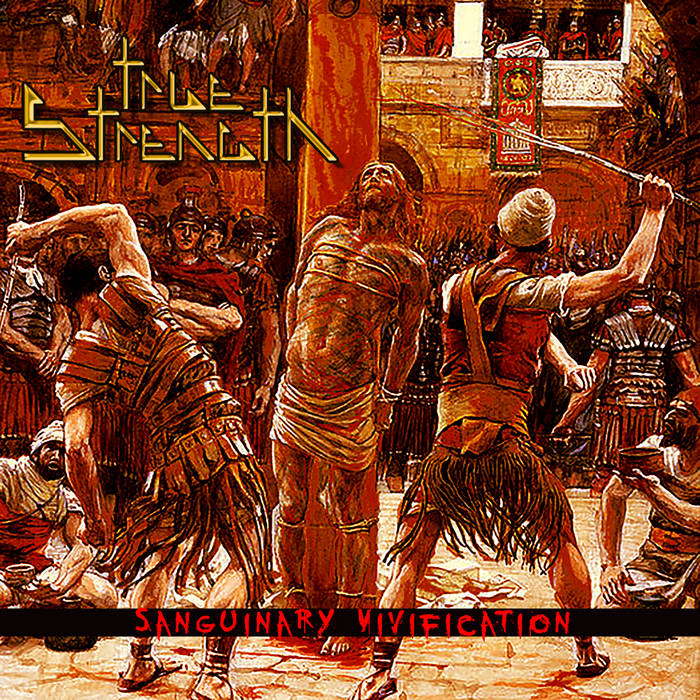 In late 2017, True Strength went into the studio to record their third album, "Sanguinary Vivification". As with "Steel Evangelist" they elected to work with Robert Sands on the recording of the album. The album was mastered by Rob Colwell of Bombworks Productions. Darnell recorded the rhythm guitar, bass, acoustic guitar and piano in three sessions. Josh Cirbo finished the lead guitar tracks after a year into the project and Ryan Mey completed the drum parts and both were sent to Sands to be added to the tracks. After being dissatisfied with his vocal performance on "Steel Evangelist", Darnell took a more patient approach and decided to hire a long-term vocalist for True Strength. During a single year, he went through over six different vocalists, with scheduling issues being the main reason for them being unable to perform on the album. Finally, Darnell's friend and former True Strength drummer Chris Clark was able to get him in touch with Zandelle's vocalist, George Tsalikis who Darnell was a big fan of since the late-90's, early-2000's. Immediately, Darnell hired Tsalikis and he completed the vocals for Sanguinary Vivification in January 2019.

The album is the first theme album that True Strength has attempted. Each song seeks to show the parallel between the "Prophecy of the Suffering Servant" in the Book of Isaiah, and the life and the passion of Our Lord and Savior Jesus Christ and how He and He alone fulfilled the prophecy written nearly 700 years before His birth. The lyrics for each song derive from actual scripture in the Books of Isaiah, the Gospels of Matthew, Mark, Luke and John, as well as the Book of Revelation!

*All digital sales of the "Sanguinary Vivification" album will be donated in the band's name to the International Christian Concern (www.persecution.org), a charity that assists persecuted Christians and their families around the world.

Bandcamp Daily  your guide to the world of Bandcamp

Featuring Oakland sounds from the Smart Bomb collective and Samplelov.